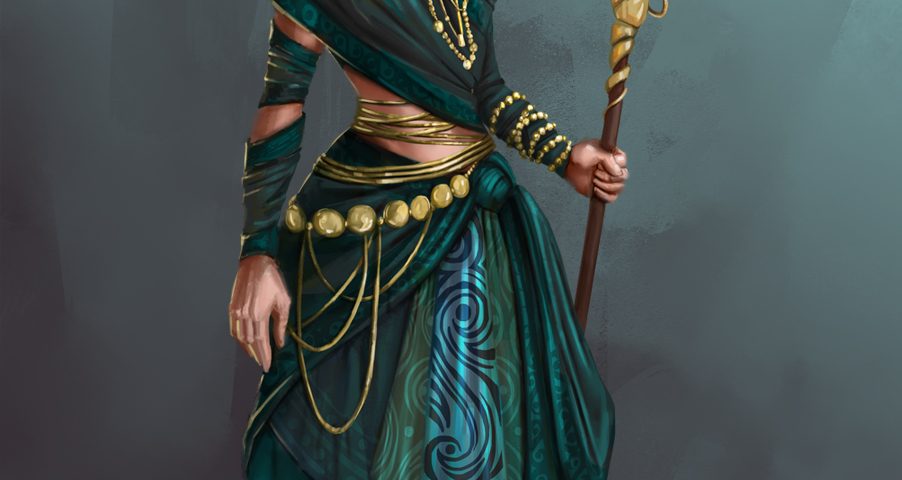 In a fantasy world far far away and a long time ago, people live in fear and struggle to survive.
For a while now, unspeakable horrors have started to crawl the Earth in broad daylight. Ordinary people are unable to deal with monsters by themselves since they lack physical and mental resilience. Hence why, it is the time for arcanists, alchemists and magi to shine.
Using their secret knowledge of the arcane, these mysterious sages have brought to life huge constructs they can control from afar, so that they humanity can safely reclaim its fallen cities and lost territories.
Commoners name them monster slayers, and regard them as symbols of hope.

Nera is one of the magi. Descended from an ancient line of arcanists, she has the same dark red hair as her mother, grandmother and all the other women in her family, thereby inheriting their talent for the arcane arts. Her golden adornments are not only for show, but also have a crucial role in an arcanist’s safety and well being. Gold is the element of the sun, the reflection of the sun’s might in this god-forsaken world. “Gold scares the horrors away” folks-people say. And they’re not far from the truth. Gold, indeed, opposes darkness, hence its use on the battlefield, in the form of amulets, weapon-decoration and it’s sometimes even woven into the magis’ clothing.

Nera is young and limited in power at this moment. She has already caught a glimpse of the inner workings of the arcane business and has become distrustful of her superiors. Therefore, she left the City for a while and is wandering the Country’s deserts in an effort to understand the real origins of the engulfing darkness.

Her adventure has just begun.