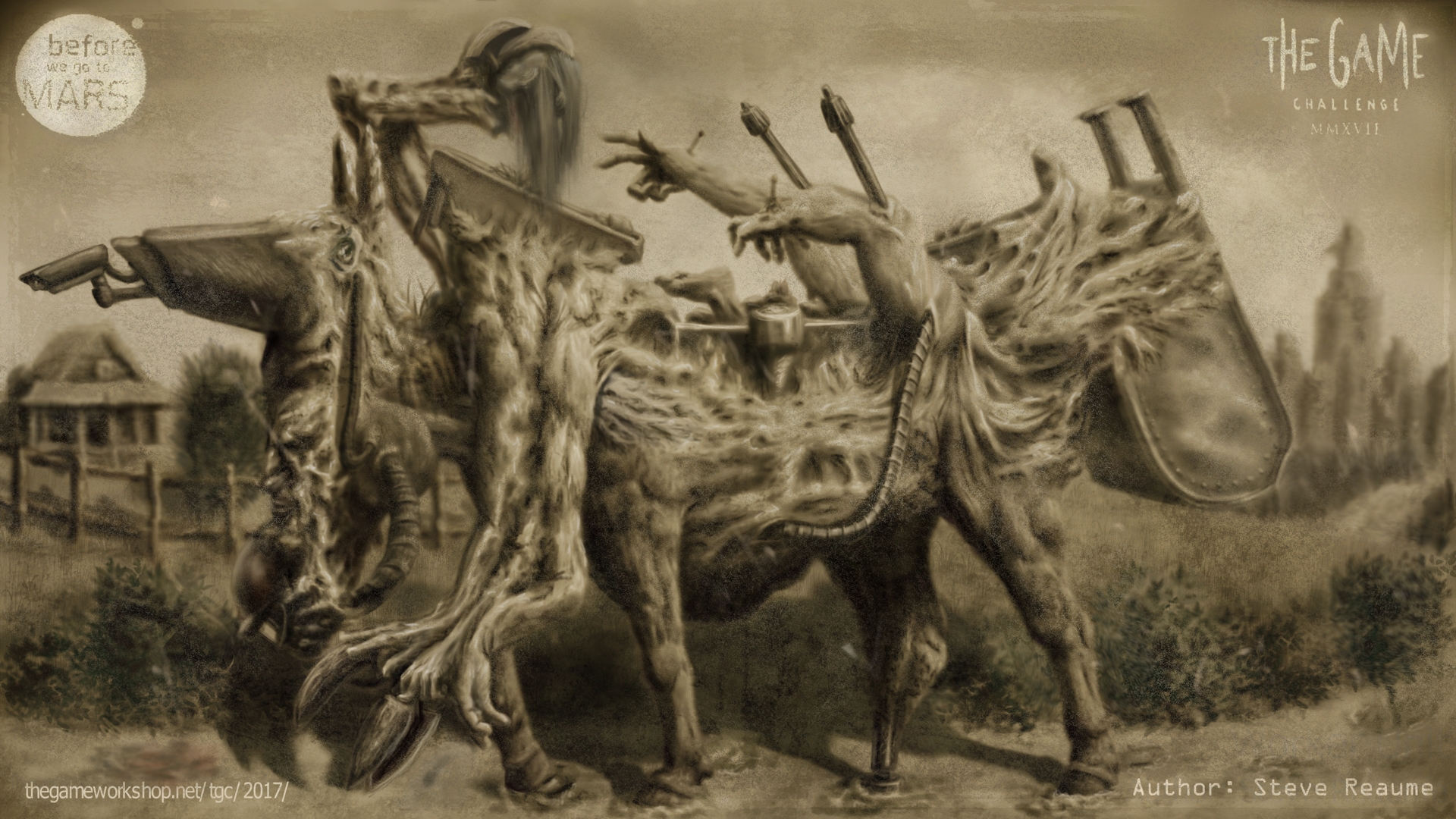 This worker unit would be sent out to scavenge for body parts or small scrap metal to be used by the Creator. One might also consider it a vehicle, but I chose to call it a worker based on its size and active role in the scavenging process. The scavenger is a low-end unit, since it is made of simple parts and is meant to be mass-produced; the Creator would rather spend valuable resources and effort on units like guardians, so it uses whatever it can find to make these, with a strong four-legged body and long reaching arms being the only true requirements. The horse’s major organs have been reorganized and dropped into a metallic extension of the stomach, to make more room for scavenged materials inside the hollow belly, which is lined with metal. The arms at the rear are super-tissue-enhanced human arms, with extremely sensitive tactile input, which is how they can examine and organize the parts into their respective containers. The camera head at the front, which emulates the shape of a regular horse’s head, scans the general area to mentally flag items it spots, while the helmet head at the bottom (where the horse’s mouth would be) examines items in detail, using its human eyes inside the protective casing. The entire head is pretty well locked in this position, although it can swerve from side to side. In between both heads is a super-tissue face with no purpose other than to satisfy the Creator’s habit of putting human-like faces on its creations (depending on one’s perspective, three different “faces” could be used to identify the creature). An item of interest is grabbed by one of the anterior arms and given to those on the back for further examination and sorting. The controlling brain is located in the horse’s cheeks, where the cables from both heads connect, and it processes the visuals from the eyes and camera, as well as the auditory information from the super-tissue horse ears. Since the unit’s stomach is in the metal receptacle between its legs, one can simply open its compartment and place the nutrients into a small shoot, which leads to the stomach for digestion. The unit can trot but not sprint, although this is dependent on how much cargo it carries. It returns to its base whenever the Creator orders, or it can follow a scheduled route, returning only for drop-off and “re-fueling”. Finally, the human-like hands surrounding each anterior arm have functional fingers, meaning they can grip and examine small objects while the primary claws dig or grab something else, although it may be difficult for them to actually reach the object.